Introduction
In SSAS implementations there is always a demand for implementing security. There are multiple possible security options and this blogpost focuses on data level security or row level security : security that depends on the useraccount and connects users to certain rows in a table. Users needs to be managed as new users appear, some will disappear and from some users may change their role.


In this post i'll descibe the dynamic dimension security in SSAS i've built at a customer. It's also called 'attribute hierarchy security'. Dynamic dimension security is about allowing restrictive number of users to a certain set of information in your cube. So you need to create an allowed set of members that users in a role are permitted to access. In this blogpost i'll be defining a set by building a MDX query for showing departments for certain users.

Here are the steps that needs to be taken for a successful implementation of dynamic dimension security:

Setup
Below are the steps described that i've taken to build a dynamic dimension security.

1) Create two SSAS users. I'll be using these users for testing the dynamic dimension security. I've added these to the SSASusers and the SSASUsers2 group. 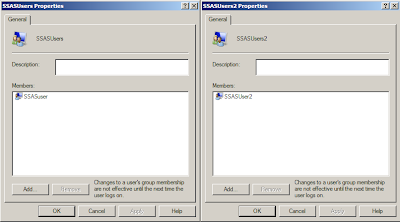 2) Create some tables in SQL and build a cube on the tables with the following structure: 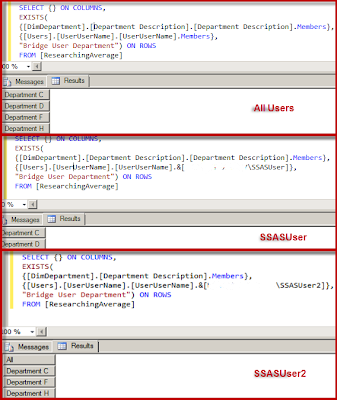 4) In this step w'll setup the dynamic security for this cube. We will create a new role, Dynamic Security, with read access to the ResearchAverage cube. 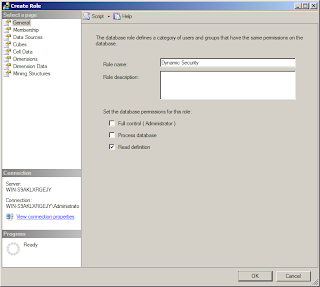 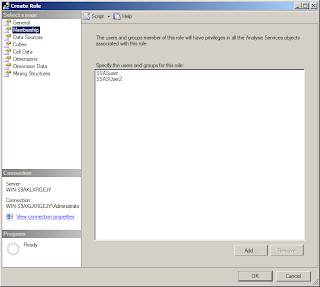 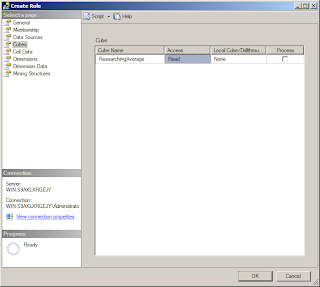 The next steps are done in BIDS (denali) but it makes no difference where you setup the security (in SSMS or BIDS). Only when you setup the security in SSMS, it will be overwritten when the cube is deployed from BIDS. The next step took me a while to understand when i was working at the customer. In this customer situation there are about 50 dimensions and a lot of role playing dimensions. One error i keep on getting was
"An error occurred in the MDX script for the dimension attribute permission's allowed member set: The dimension '[User]' was not found in the cube when the string, [User].[UserName].[UserName].&[<user>], was parsed."
Because i had so many dimensions i didn't see the cube dimensions, at first. So i implemented the security at databasedimension level and not at cube dimensionlevel. The combobox "dimension" stores both database dimensions and cube dimensions. This is very confusing. I'm not completely sure that this also needed in this every situation. Anyway i've implemented the security at cubedimension level. 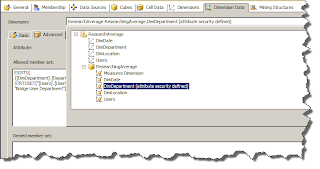 The following window does the trick. It limits the allowed set because of the usage of the UserName() function. This function returns a windows useraccount like Laptop\Hennie or Laptop\SSASUser. 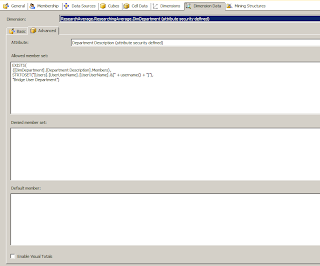 I've left open the "enable visual totals" (lower left) intentionally and pressed on check (not shown in the window) and we have a....successful check!

The next step is running SSMS with the SSASUser account

And we can only see the departments that are authorized for the SSASUser: 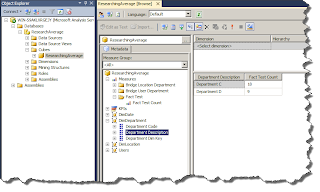 The next step is running SSMS with the SSASUser2 account

And we can only see the departments that are granted by SSASUser2: 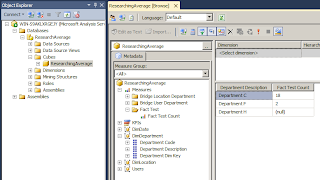 Okay, let's try another dimension like date and ...Now we can see all the information. That was not supposed to happen. 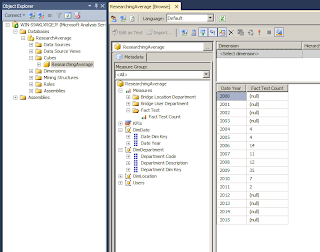 You can solve this with "enable visual totals" option. 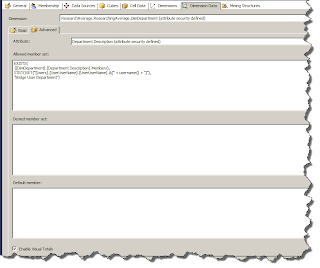 And now only the facts are shown that belongs to a department: 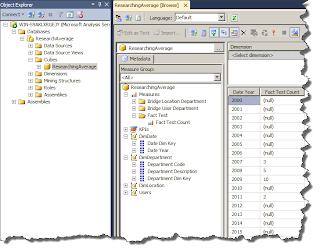 Other things to do are making things invisible. The Bridge User Department measure and the User dimension provides a base for the security of the dynamic dimension security. These tables are only needed for the security and not for end user querying. So these two should be set to invisible. Important note: these are only hidden and when the end user is familiar with the presence of them, still they can query them.

Conclusions
There some things that are a bit annoying in my opinion:
So for securing the cube, dynamic security is a great solution for letting the users play with the cubes with Excel.

Hennie de Nooijer
Utrecht, Netherlands
Sharing with you what I learn and experience. 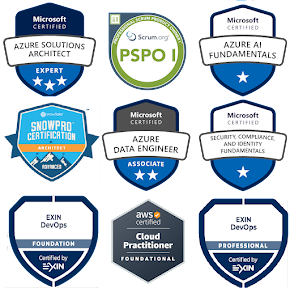